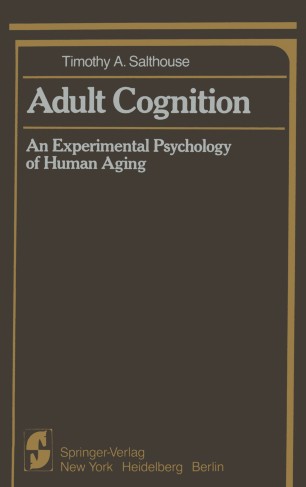 An Experimental Psychology of Human Aging

For some time now, the study of cognitive development has been far and away the most active discipline within developmental psychology. Although there would be much disagreement as to the exact proportion of papers published in developmental journals that could be considered cognitive, 50% seems like a conservative estimate. Hence, a series of scholarly books to be devoted to work in cognitive development is especially appropriate at this time. The Springer Series in Cognitive Development contains two basic types of books, namely, edited collections of original chapters by several authors, and original volumes written by one author or a small group of authors. The flagship for the Springer Series is a serial publication of the "advances" type, carrying the subtitle Progress in Cognitive Development Research. Volumes in the Progress sequence are strongly thematic, in that each is limited to some well-defined domain of cognitive-developmental research (e. g. , logical and mathematical development, semantic development). All Progress volumes are edited collections. Editors of such books, upon consultation with the Series Editor, may elect to have their works published either as contributions to the Progress sequence or as separate volumes. All books written by one author or a small group of authors will be published as separate volumes within the series. A fairly broad definition of cognitive development is being used in the selection of books for this series.