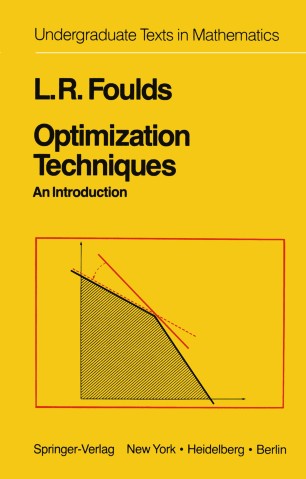 Optimization is the process by which the optimal solution to a problem, or optimum, is produced. The word optimum has come from the Latin word optimus, meaning best. And since the beginning of his existence Man has strived for that which is best. There has been a host of contributions, from Archimedes to the present day, scattered across many disciplines. Many of the earlier ideas, although interesting from a theoretical point of view, were originally of little practical use, as they involved a daunting amount of com­ putational effort. Now modern computers perform calculations, whose time was once estimated in man-years, in the figurative blink of an eye. Thus it has been worthwhile to resurrect many of these earlier methods. The advent of the computer has helped bring about the unification of optimization theory into a rapidly growing branch of applied mathematics. The major objective of this book is to provide an introduction to the main optimization tech­ niques which are at present in use. It has been written for final year undergrad­ uates or first year graduates studying mathematics, engineering, business, or the physical or social sciences. The book does not assume much mathemati­ cal knowledge. It has an appendix containing the necessary linear algebra and basic calculus, making it virtually self-contained. This text evolved out of the experience of teaching the material to finishing undergraduates and beginning graduates.