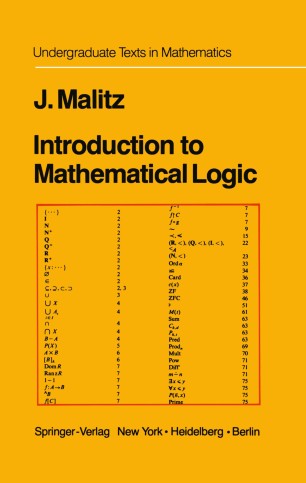 This book is intended as an undergraduate senior level or beginning graduate level text for mathematical logic. There are virtually no prere­ quisites, although a familiarity with notions encountered in a beginning course in abstract algebra such as groups, rings, and fields will be useful in providing some motivation for the topics in Part III. An attempt has been made to develop the beginning of each part slowly and then to gradually quicken the pace and the complexity of the material. Each part ends with a brief introduction to selected topics of current interest. The text is divided into three parts: one dealing with set theory, another with computable function theory, and the last with model theory. Part III relies heavily on the notation, concepts and results discussed in Part I and to some extent on Part II. Parts I and II are independent of each other, and each provides enough material for a one semester course. The exercises cover a wide range of difficulty with an emphasis on more routine problems in the earlier sections of each part in order to familiarize the reader with the new notions and methods. The more difficult exercises are accompanied by hints. In some cases significant theorems are devel­ oped step by step with hints in the problems. Such theorems are not used later in the sequence.