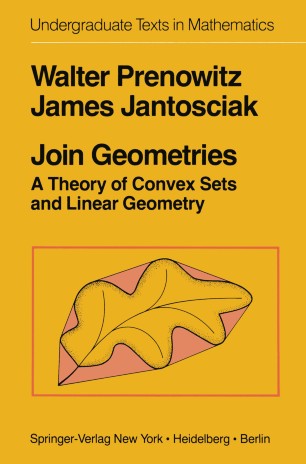 A Theory of Convex Sets and Linear Geometry

The main object of this book is to reorient and revitalize classical geometry in a way that will bring it closer to the mainstream of contemporary mathematics. The postulational basis of the subject will be radically revised in order to construct a broad-scale and conceptually unified treatment. The familiar figures of classical geometry-points, segments, lines, planes, triangles, circles, and so on-stem from problems in the physical world and seem to be conceptually unrelated. However, a natural setting for their study is provided by the concept of convex set, which is compara­ tively new in the history of geometrical ideas. The familiarfigures can then appear as convex sets, boundaries of convex sets, or finite unions of convex sets. Moreover, two basic types of figure in linear geometry are special cases of convex set: linear space (point, line, and plane) and halfspace (ray, halfplane, and halfspace). Therefore we choose convex set to be the central type of figure in our treatment of geometry. How can the wealth of geometric knowledge be organized around this idea? By defini­ tion, a set is convex if it contains the segment joining each pair of its points; that is, if it is closed under the operation of joining two points to form a segment. But this is precisely the basic operation in Euclid.