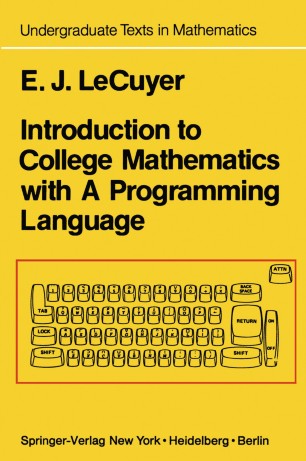 Introduction to College Mathematics with A Programming Language

The topics covered in this text are those usually covered in a full year's course in finite mathematics or mathematics for liberal arts students. They correspond very closely to the topics I have taught at Western New England College to freshmen business and liberal arts students. They include set theory, logic, matrices and determinants, functions and graph­ ing, basic differential and integral calculus, probability and statistics, and trigonometry. Because this is an introductory text, none of these topics is dealt with in great depth. The idea is to introduce the student to some of the basic concepts in mathematics along with some of their applications. I believe that this text is self-contained and can be used successfully by any college student who has completed at least two years of high school mathematics including one year of algebra. In addition, no previous knowledge of any programming language is necessary. The distinguishing feature of this text is that the student is given the opportunity to learn the mathematical concepts via A Programming Lan­ guage (APL). APL was developed by Kenneth E. Iverson while he was at Harvard University and was presented in a book by Dr. Iverson entitled A i Programming Language in 1962. He invented APL for educational purpo­ ses. That is, APL was designed to be a consistent, unambiguous, and powerful notation for communicating mathematical ideas. In 1966, APL became available on a time-sharing system at IBM.