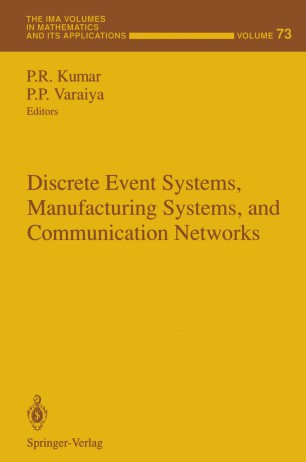 Part of the The IMA Volumes in Mathematics and its Applications book series (IMA, volume 73)

This IMA Volume in Mathematics and its Applications DISCRETE EVENT SYSTEMS, MANUFACTURING SYSTEMS AND COMMUNICATION NETWORKS is based on the proceedings of a workshop that was an integral part of the 1992-93 IMA program on "Control Theory. " The study of discrete event dynamical systems (DEDS) has become rapidly popular among researchers in systems and control, in communication networks, in manufacturing, and in distributed computing. This development has created problems for re­ searchers and potential "consumers" of the research. The first problem is the veritable Babel of languages, formalisms, and approaches, which makes it very difficult to determine the commonalities and distinctions among the competing schools of approaches. The second, related, problem arises from the different traditions, paradigms, values, and experience that scholars bring to their study of DEDS, depending on whether they come from control, com­ munication, computer science, or mathematical logic. As a result, intellectual exchange among scholars becomes compromised by unexplicated assumptions. The purpose of the Workshop was to promote exchange among scholars representing some of the major "schools" of thought in DEDS with the hope that (1) greater clarity will be achieved thereby, and (2) cross-fertilization will lead to more fruitful questions. We thank P. R. Kumar and P. P. Varaiya for organizing the workshop and editing the proceedings. We also take this opportunity to thank the National Science Foundation and the Army Research Office, whose financial support made the workshop possible. A vner Friedman Willard Miller, Jr.