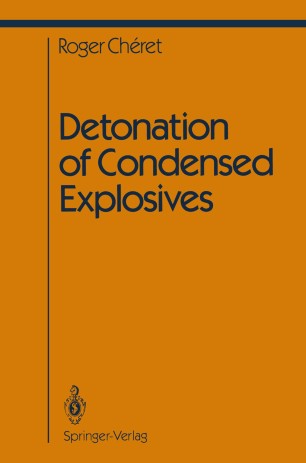 This work marks a stage in the evolution of a scientific and technical field which has been developed by the Commissariat a l'Energie Atomique (CEA) over several decades. Many members of the staff of the CEA have won re­ nown in this field, and their work has brought it to the high degree of excel­ lence for which it is internationally recognized today. These scientists had to consider every aspect of the field, as it concerned: modeling, which has recourse to fluid thermodynamics, molecular phys­ ics, and chemistry; numerical evaluation, which relies on mathematical analysis and data processing; and experiments in the firing area, which require specific stress generators and instrumentation. Whilst this book is a testament to the activity and success of staff of the CEA, it also reviews a number ofthe advances made in the discipline. How­ ever, it is not intended to be an exhaustive account of those advances; it is assumed that the reader can, if desired, consult the standard monographs, and more recent, more specialized works (notably W.C. Davis and W. Fickett, and C.L. Mader). The history of the discipline is interesting in itself, and also as an illustra­ tion of the causes which lead to progress in a coherent body of scientific work. I should like to make some comments on this progress, of which there is a fascinating summary in the introduction, and which will figure largely throughout the work.