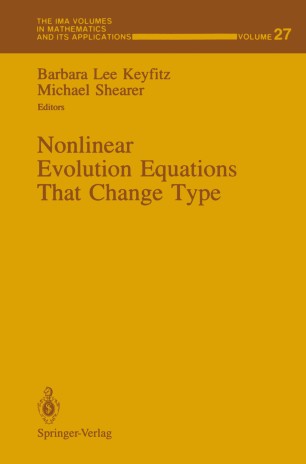 Part of the The IMA Volumes in Mathematics and Its Applications book series (IMA, volume 27)

This IMA Volume in Mathematics and its Applications NONLINEAR EVOLUTION EQUATIONS THAT CHANGE TYPE is based on the proceedings of a workshop which was an integral part of the 1988-89 IMA program on NONLINEAR WAVES. The workshop focussed on prob­ lems of ill-posedness and change of type which arise in modeling flows in porous materials, viscoelastic fluids and solids and phase changes. We thank the Coordinat­ ing Committee: James Glimm, Daniel Joseph, Barbara Lee Keyfitz, Andrew Majda, Alan Newell, Peter Olver, David Sattinger and David Schaeffer for planning and implementing an exciting and stimulating year-long program. We especially thank the workshop organizers, Barbara Lee Keyfitz and Michael Shearer, for their efforts in bringing together many of the major figures in those research fields in which theories for nonlinear evolution equations that change type are being developed. A vner Friedman Willard Miller, J r. ix PREFACE During the winter and spring quarters of the 1988/89 IMA Program on Non­ linear Waves, the issue of change of type in nonlinear partial differential equations appeared frequently. Discussion began with the January 1989 workshop on Two­ Phase Waves in Fluidized Beds, Sedimentation and Granular Flow; some of the papers in the proceedings of that workshop present strategies designed to avoid the appearance of change of type in models for multiphase fluid flow.