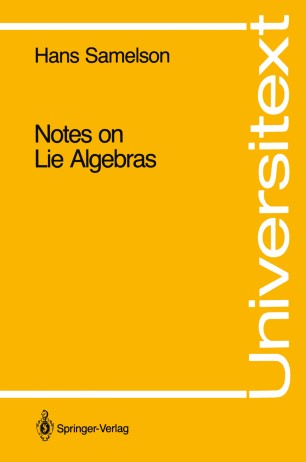 (Cartan sub Lie algebra, roots, Weyl group, Dynkin diagram, . . . ) and the classification, as found by Killing and Cartan (the list of all semisimple Lie algebras consists of (1) the special- linear ones, i. e. all matrices (of any fixed dimension) with trace 0, (2) the orthogonal ones, i. e. all skewsymmetric ma­ trices (of any fixed dimension), (3) the symplectic ones, i. e. all matrices M (of any fixed even dimension) that satisfy M J = - J MT with a certain non-degenerate skewsymmetric matrix J, and (4) five special Lie algebras G2, F , E , E , E , of dimensions 14,52,78,133,248, the "exceptional Lie 4 6 7 s algebras" , that just somehow appear in the process). There is also a discus­ sion of the compact form and other real forms of a (complex) semisimple Lie algebra, and a section on automorphisms. The third chapter brings the theory of the finite dimensional representations of a semisimple Lie alge­ bra, with the highest or extreme weight as central notion. The proof for the existence of representations is an ad hoc version of the present standard proof, but avoids explicit use of the Poincare-Birkhoff-Witt theorem. Complete reducibility is proved, as usual, with J. H. C. Whitehead's proof (the first proof, by H. Weyl, was analytical-topological and used the exis­ tence of a compact form of the group in question). Then come H.