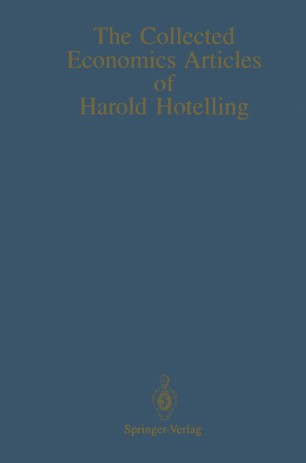 In 1985 I first began my research on the life and work of Harold Hotel­ ling. That year, Harold Hotelling's widow had donated the collection of his private p:;tpers, correspondence and manuscripts to the Butler Library, Columbia University. This is a most appropriate place for them to reside, in that Hotelling's most productive period as an active researcher in eco­ nomics and statistics coincides with the years when he was Professor of Mathematical Economics at Columbia (1931-1946). The Hotelling Collection comprises some 13,000 separate items and contains numerous unpublished letters and manuscripts of great importance to historians of economics and statistics. In the course of the following year I was able, with the generous financial assistance of the Nuffield Foundation, the Economic and Social Research Council, the British Academy and the University of Durham, to spend six weeks over the Easter period working on the collection. I returned to New York in September 1986 while on sabbatical leave from the University of Durham, and I spent most of the following eight months examining the many documents in the collection. During that academic year I was grateful to Columbia University who gave me the title of Visiting Research Professor and gave me the freedom to work in their many well-stocked libraries.