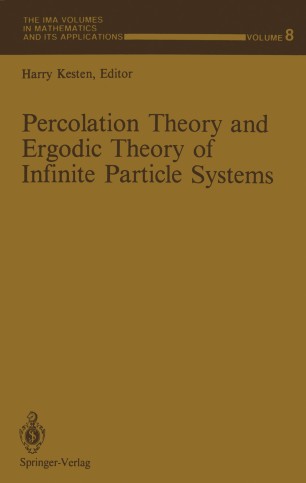 Part of the The IMA Volumes in Mathematics and Its Applications book series (IMA, volume 8)

This IMA Volume in ~athematics and its Applications PERCOLATION THEORY AND ERGODIC THEORY OF INFINITE PARTICLE SYSTEMS represents the proceedings of a workshop which was an integral part of the 19R4-85 IMA program on STOCHASTIC DIFFERENTIAL EQUATIONS AND THEIR APPLICATIONS We are grateful to the Scientific Committee: naniel Stroock (Chairman) Wendell Fleming Theodore Harris Pierre-Louis Lions Steven Orey George Papanicolaoo for planning and implementing an exciting and stimulating year-long program. We especially thank the Workshop Organizing Committee, Harry Kesten (Chairman), Richard Holley, and Thomas Liggett for organizing a workshop which brought together scientists and mathematicians in a variety of areas for a fruitful exchange of ideas. George R. Sell Hans Weinherger PREFACE Percolation theory and interacting particle systems both have seen an explosive growth in the last decade. These suhfields of probability theory are closely related to statistical mechanics and many of the publications on these suhjects (especially on the former) appear in physics journals, wit~ a great variahility in the level of rigour. There is a certain similarity and overlap hetween the methods used in these two areas and, not surprisingly, they tend to attract the same probabilists. It seemed a good idea to organize a workshop on "Percolation Theory and Ergodic Theory of Infinite Particle Systems" in the framework of the special probahility year at the Institute for Mathematics and its Applications in 1985-86. Such a workshop, dealing largely with rigorous results, was indeed held in February 1986.