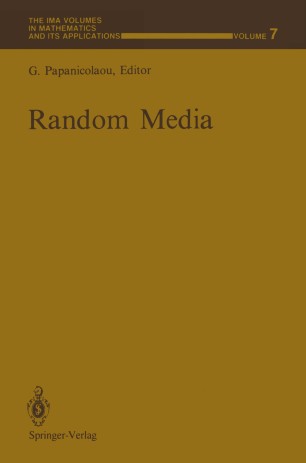 Part of the The IMA Volumes in Mathematics and Its Applications book series (IMA, volume 7)

This IMA Volume in Mathematics and its Applications RANDOM MEDIA represents the proceedings of a workshop which was an integral part of the 1984-85 IMA program on STOCHASTIC DIFFERENTIAL EQUATIONS AND THEIR APPLICATIONS We are grateful to the Scientific Committee: Daniel Stroock (Chairman) \~ende 11 Fl emi ng Theodore Harris Pierre-Louis Lions Steven Orey George Papanicolaou for planning and implementing an exciting and stimulating year-long program. We especi ally thank George Papani col aOIJ for organi zi ng a workshop which produced fruitful interactions between mathematicians and scientists from both academia and industry. George R. Sell Hans I~ei nherger PREFACE During September 1985 a workshop on random media was held at the Institute for Mathematics and its Applications at the University of Minnesota. This was part of the program for the year on Probability and Stochastic Processes at IMA. The main objective of the workshop was to bring together researchers who work in a broad area including applications and mathematical methodology. The papers in this volume give an idea of what went on and they also represent a cross section of problems and methods that are currently of interest.