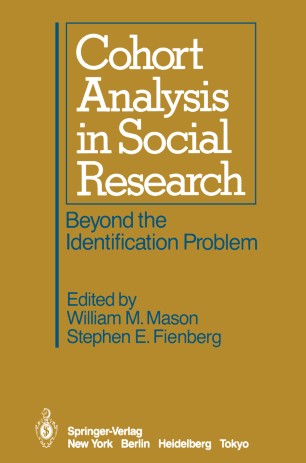 Beyond the Identification Problem

The existence of the present volume can be traced to methodological concerns about cohort analysis, all of which were evident throughout most of the social sciences by the late 1970s. For some social scientists, they became part of a broader discussion concerning the need for new analytical techniques for research based on longitudinal data. In 1976, the Social Science Research Council (SSRC), with funds from the National Institute of Education, established a Committee on the Methodology of Longitudinal Research. (The scholars who comprised this committee are listed at the front of this volume. ) As part of the efforts of this Committee, an interdisciplinary conference on cohort analysis was held in the summer of 1979, in Snowmass, Colorado. Much of the work presented here stems from that conference, the purpose of which was to promote the development of general methodological tools for the study of social change. The conference included five major presentations by (1) William Mason and Herbert Smith, (2) Karl J6reskog and Dag S6rbom, (3) Gregory Markus, (4) John Hobcraft, Jane Menken and Samuel Preston, and (5) Stephen Fienberg and William Mason. The formal presentations were each followed by extensive discussion, which involved as participants: Paul Baltes, William Butz, Philip Converse, Otis Dudley Duncan, David Freedman, William Meredith, John Nesselroade, Daniel Price, Thomas Pullum, Peter Read, Matilda White Riley, Norman Ryder, Warren Sanderson, Warner Schaie, Burton Singer, Nancy Tuma, Harrison White, and Halliman Winsborough.