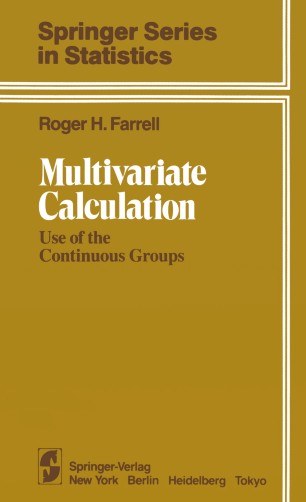 Use of the Continuous Groups

Like some of my colleagues, in my earlier years I found the multivariate Jacobian calculations horrible and unbelievable. As I listened and read during the years 1956 to 1974 I continually saw alternatives to the Jacobian and variable change method of computing probability density functions. Further, it was made clear by the work of A. T. James that computation of the density functions of the sets of roots of determinental equations required a method other than Jacobian calculations and that the densities could be calculated using differential forms on manifolds. It had become clear from the work ofC S. Herz and A. T. James that the expression of the noncentral multivariate density functions required integration with respect to Haar measures on locally compact groups. Material on manifolds and locally compact groups had not yet reached the pages of multivariate books of the time and also much material about multivariate computations existed only in the journal literature or in unpublished sets oflecture notes. In spirit, being more a mathematician than a statistician, the urge to write a book giving an integrated treatment of these topics found expression in 1974-1975 when I took a one year medical leave of absence from Cornell University. During this period I wrote Techniques of Multivariate Calculation. Writing a coherent treatment of the various methods made obvious re­ quired background material.