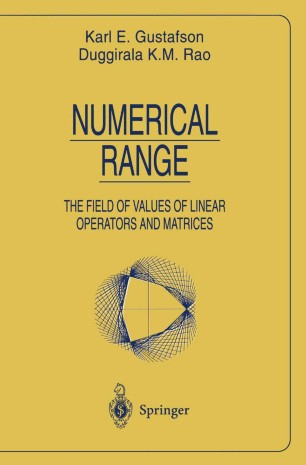 The Field of Values of Linear Operators and Matrices

The theories of quadratic forms and their applications appear in many parts of mathematics and the sciences. All students of mathematics have the opportunity to encounter such concepts and applications in their first course in linear algebra. This subject and its extensions to infinite dimen­ sions comprise the theory of the numerical range W(T). There are two competing names for W(T), namely, the numerical range of T and the field of values for T. The former has been favored historically by the func­ tional analysis community, the latter by the matrix analysis community. It is a toss-up to decide which is preferable, and we have finally chosen the former because it is our habit, it is a more efficient expression, and because in recent conferences dedicated to W(T), even the linear algebra commu­ nity has adopted it. Also, one universally refers to the numerical radius, and not to the field of values radius. Originally, Toeplitz and Hausdorff called it the Wertvorrat of a bilinear form, so other good names would be value field or form values. The Russian community has referred to it as the Hausdorff domain. Murnaghan in his early paper first called it the region of the complex plane covered by those values for an n x n matrix T, then the range of values of a Hermitian matrix, then the field of values when he analyzed what he called the sought-for region.