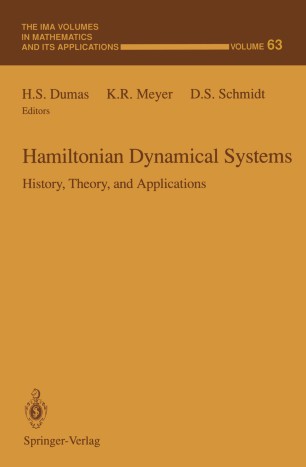 Part of the The IMA Volumes in Mathematics and its Applications book series (IMA, volume 63)

From its origins nearly two centuries ago, Hamiltonian dynamics has grown to embrace the physics of nearly all systems that evolve without dissipation, as well as a number of branches of mathematics, some of which were literally created along the way. This volume contains the proceedings of the International Conference on Hamiltonian Dynamical Systems; its contents reflect the wide scope and increasing influence of Hamiltonian methods, with contributions from a whole spectrum of researchers in mathematics and physics from more than half a dozen countries, as well as several researchers in the history of science. With the inclusion of several historical articles, this volume is not only a slice of state-of-the-art methodology in Hamiltonian dynamics, but also a slice of the bigger picture in which that methodology is imbedded.