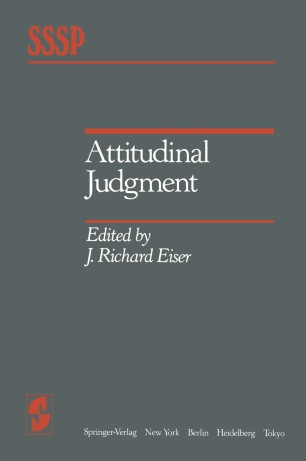 Despite the central place that the study of attitudes has long held in social psycho­ logical research, the last decade or so has been relatively quiet as far as the de­ velopment of attitude theory has been concerned. If one looks back to the Yale studies on communication and persuasion in the 1950s, followed by the massive literature derived from cognitive dissonance theory and its alternatives, there may be a temptation to think that the well of researchable questions has run almost dry. The purpose of this book is to convince the reader that this is not the case. On the contrary, a new look at the concept of attitude offers the prospect of as rich and varied a range of questions as ever before. The term "new look" is an old one in social psychology. It was used 30 to 40 years ago as the designation for the school of thought which held that "basic" psychological processes such as perception, cognition, learning, and memory could be influenced by attitudes, motives, and values. There are still lessons to be learned from that period, and the new "new look" that is now emerging incorporates some of these same themes, albeit in the context of changing issues and emphases.