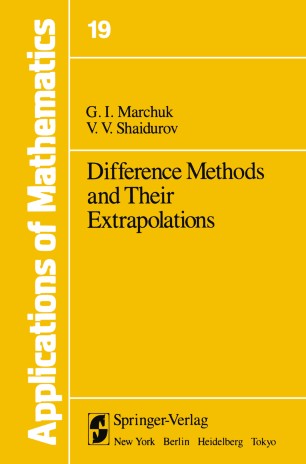 Difference Methods and Their Extrapolations

Part of the Applications of Mathematics book series (SMAP, volume 19)

The stimulus for the present work is the growing need for more accurate numerical methods. The rapid advances in computer technology have not provided the resources for computations which make use of methods with low accuracy. The computational speed of computers is continually increasing, while memory still remains a problem when one handles large arrays. More accurate numerical methods allow us to reduce the overall computation time by of magnitude. several orders The problem of finding the most efficient methods for the numerical solution of equations, under the assumption of fixed array size, is therefore of paramount importance. Advances in the applied sciences, such as aerodynamics, hydrodynamics, particle transport, and scattering, have increased the demands placed on numerical mathematics. New mathematical models, describing various physical phenomena in greater detail than ever before, create new demands on applied mathematics, and have acted as a major impetus to the development of computer science. For example, when investigating the stability of a fluid flowing around an object one needs to solve the low viscosity form of certain hydrodynamic equations describing the fluid flow. The usual numerical methods for doing so require the introduction of a "computational viscosity," which usually exceeds the physical value; the results obtained thus present a distorted picture of the phenomena under study. A similar situation arises in the study of behavior of the oceans, assuming weak turbulence. Many additional examples of this type can be given.