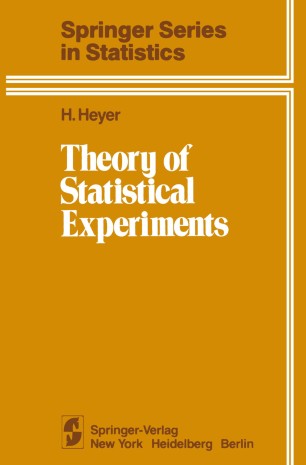 By a statistical experiment we mean the procedure of drawing a sample with the intention of making a decision. The sample values are to be regarded as the values of a random variable defined on some meas­ urable space, and the decisions made are to be functions of this random variable. Although the roots of this notion of statistical experiment extend back nearly two hundred years, the formal treatment, which involves a description of the possible decision procedures and a conscious attempt to control errors, is of much more recent origin. Building upon the work of R. A. Fisher, J. Neyman and E. S. Pearson formalized many deci­ sion problems associated with the testing of hypotheses. Later A. Wald gave the first completely general formulation of the problem of statisti­ cal experimentation and the associated decision theory. These achieve­ ments rested upon the fortunate fact that the foundations of probability had by then been laid bare, for it appears to be necessary that any such quantitative theory of statistics be based upon probability theory. The present state of this theory has benefited greatly from contri­ butions by D. Blackwell and L. LeCam whose fundamental articles expanded the mathematical theory of statistical experiments into the field of com­ parison of experiments. This will be the main motivation for the ap­ proach to the subject taken in this book.