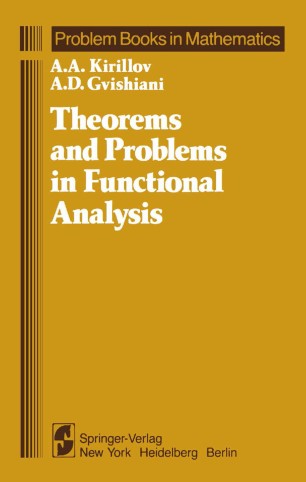 Theorems and Problems in Functional Analysis

Even the simplest mathematical abstraction of the phenomena of reality­ the real line-can be regarded from different points of view by different mathematical disciplines. For example, the algebraic approach to the study of the real line involves describing its properties as a set to whose elements we can apply" operations," and obtaining an algebraic model of it on the basis of these properties, without regard for the topological properties. On the other hand, we can focus on the topology of the real line and construct a formal model of it by singling out its" continuity" as a basis for the model. Analysis regards the line, and the functions on it, in the unity of the whole system of their algebraic and topological properties, with the fundamental deductions about them obtained by using the interplay between the algebraic and topological structures. The same picture is observed at higher stages of abstraction. Algebra studies linear spaces, groups, rings, modules, and so on. Topology studies structures of a different kind on arbitrary sets, structures that give mathe­ matical meaning to the concepts of a limit, continuity, a neighborhood, and so on. Functional analysis takes up topological linear spaces, topological groups, normed rings, modules of representations of topological groups in topological linear spaces, and so on. Thus, the basic object of study in functional analysis consists of objects equipped with compatible algebraic and topological structures.