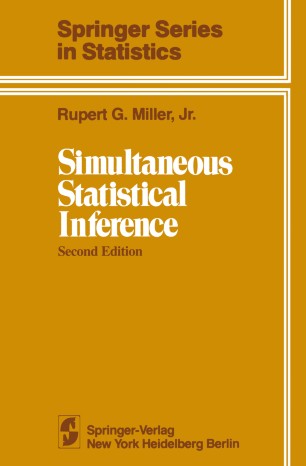 Simultaneous Statistical Inference, which was published originally in 1966 by McGraw-Hill Book Company, went out of print in 1973. Since then, it has been available from University Microfilms International in xerox form. With this new edition Springer-Verlag has republished the original edition along with my review article on multiple comparisons from the December 1977 issue of the Journal of the American Statistical Association. This review article covered developments in the field from 1966 through 1976. A few minor typographical errors in the original edition have been corrected in this new edition. A new table of critical points for the studentized maximum modulus is included in this second edition as an addendum. The original edition included the table by K. C. S. Pillai and K. V. Ramachandran, which was meager but the best available at the time. This edition contains the table published in Biometrika in 1971 by G. 1. Hahn and R. W. Hendrickson, which is far more comprehensive and therefore more useful. The typing was ably handled by Wanda Edminster for the review article and Karola Decleve for the changes for the second edition. My wife, Barbara, again cheerfully assisted in the proofreading. Fred Leone kindly granted permission from the American Statistical Association to reproduce my review article. Also, Gerald Hahn, Richard Hendrickson, and, for Biometrika, David Cox graciously granted permission to reproduce the new table of the studentized maximum modulus. The work in preparing the review article was partially supported by NIH Grant ROI GM21215.