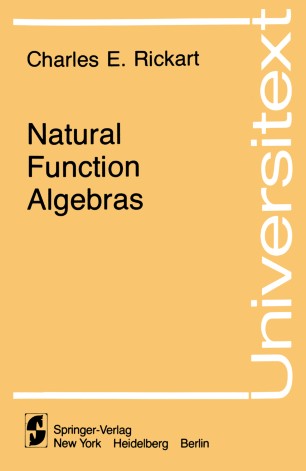 The term "function algebra" usually refers to a uniformly closed algebra of complex valued continuous functions on a compact Hausdorff space. Such Banach alge­ bras, which are also called "uniform algebras", have been much studied during the past 15 or 20 years. Since the most important examples of uniform algebras consist of, or are built up from, analytic functions, it is not surprising that most of the work has been dominated by questions of analyticity in one form or another. In fact, the study of these special algebras and their generalizations accounts for the bulk of the re­ search on function algebras. We are concerned here, however, with another facet of the subject based on the observation that very general algebras of continuous func­ tions tend to exhibit certain properties that are strongly reminiscent of analyticity. Although there exist a variety of well-known properties of this kind that could be mentioned, in many ways the most striking is a local maximum modulus principle proved in 1960 by Hugo Rossi [RIl]. This result, one of the deepest and most elegant in the theory of function algebras, is an essential tool in the theory as we have developed it here. It holds for an arbitrary Banaeh algebra of £unctions defined on the spectrum (maximal ideal space) of the algebra. These are the algebras, along with appropriate generalizations to algebras defined on noncompact spaces, that we call "natural func­ tion algebras".