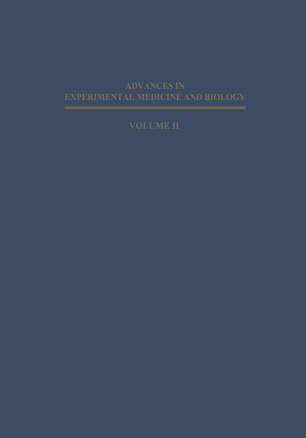 Part of the Advances in Experimental Medicine and Biology book series (AEMB, volume 11)

Howard G. Knuttgen of Biology, Boston University, 2 Cummington Department Street, Boston, 02215 Massachusetts, USA The relationship of the formation of lactate acid to skeletal muscle energy release in exercising humans was first explored by A. V. Hill and co-workers (2l, 22). The term "oxygen debt" was suggested by them to describe the excess oxygen consumption of recovery which they felt was closely related. A combination of their work and the earlier work of Krogh and Lindhard (35) re­ sulted at that time in the belief that a certain amount of energy release during the transition from rest to exercise was provided by a non-aerobic source, glycolysis. The resulting accumulation of lactic acid (as lactate) in the body required an extra con­ sumption during recovery for its oxidative removal. Jervell (24) subsequently showed that, in exercise, the greatest accumulation in blood took place during the first few minutes. He felt that the blood lactate increase was due to a shortage of oxygen during the transition period. The observation was also made for the first time that the increased level of lac­ tate due to exercise could be made to fall faster if mild exercise was employed by the subjects in place of sedentary recovery. The work of Margaria, Edwards and Dill (40) appeared in 1933. They observed that exercise (treadmill running) could be carried on at low levels without significant changes in resting levels of blood lactate.