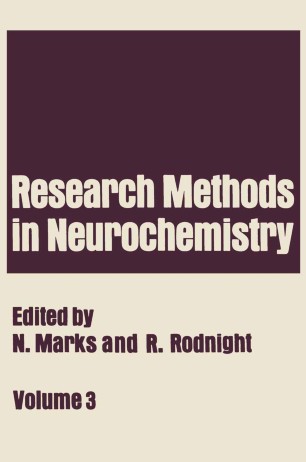 With the continued rapid expansion of neurochemical research, there has been no shortage of new developments in methodology for this third volume of Research Methods in Neurochemistry. As in previous volumes we have again tried to provide some balance in the subjects represented. The wisdom of this policy may be questioned since it can lead to delay in publica­ tion, but there are many approaches to the chemical study of the nervous system and a methods book needs to stand on its own as well as be part of a series. In one respect, however, the present volume departs from this policy, in that we have included two chapters on micromethods for analyzing amines and amino acids, both giving special emphasis to dansylation techniques. These chapters are complementary and we feel justified in publishing them in one volume in view of the importance of such micromethods for the study of neural systems. At the other end of the scale, particular attention may be drawn to the chapter by D. D. Gilboe and colleagues describing their remarkable procedures for studying metabolism in the isolated canine brain. We were fortunate also in persuading S. S. Oja to extend the general prin­ ciples of transport systems he described in Volume 2 to amino acids in brain slices. In addition, there are the usual chapters on components of neural tissues, which once again we have found convenient to divide into enzymes, macromolecules, and other constituents.