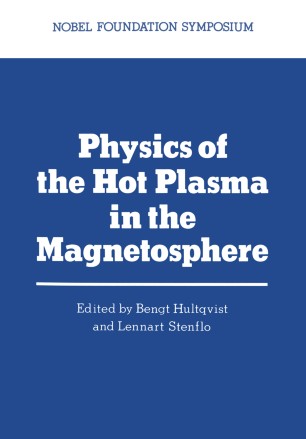 Physics of the Hot Plasma in the Magnetosphere

Nobel Symposium No. 30 on the Physics of the Hot Plasma in the Magnetosphere was held at Kiruna Geophysical Institute, Kiruna, Sweden from April 2-4, 1975. Some 40 leading experts from America, USSR, and Western Europe attended the Symposium. The purpose of the meeting was to review and discuss the physics of the hot plasma in the magnetosphere with special empha­ sis on unsolved problems on which attention needs to be focused during the International Magnetospheric Study 1976-1978. The field is very extensive and complete coverage of all aspects was of course not possible. The radiation belts proper were, for instance, not covered. There were no formal contributed papers, but much time was devoted to discussion. These proceedings contain all review papers except the one by R.Z. Sagdeev. They are ordered by subject, starting, after the introductory lecture, with the problem of how the plasma enters the magnetosphere and ending with the question of the interaction with the ionosphere. The Organizing Committee for the symposium was composed of the following Swedish scientists: E.-A. Brunberg, C.G. Fa1thammar, I. Hu1then, B. Hu1tqvist (chairman), L. Stenf10, and H. Wilhe1msson. The Symposium was financed by the Nobel Foundation through grants from the Tercentenary Foundation of the Bank of Sweden, by the Swedish Board for Space Activities, and the Royal Swedish Academy of Sciences, which is gratefully acknowledged. Appreciated contributions "in natura" were also received from the town of Kiruna and the LKAB Company.