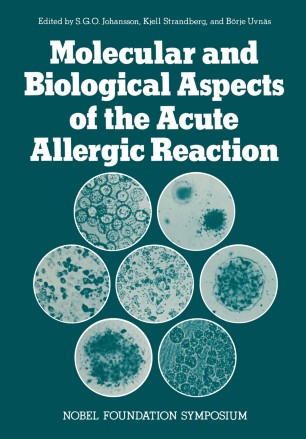 Molecular and Biological Aspects of the Acute Allergic Reaction

Ladies and Gentlemen, dear guests, It is my great pleasure and privilege to extend our heartiest wel­ come to you, the participants of this 33rd Nobel symposium. To those of you who have not attended a Nobel symposium before I would like just briefly to explain why Nobel's name is linked to this series of symposia. Alfred Nobel, who died in San Remo in 1896, donated the main part of his fortune to the promotion of in­ ternational science and culture by establishing annual prizes for outstanding discoveries or contributions within five fields, che­ mistry, physics, physiology or medicine, literature and peace. The annual awards should be distributed by five corresponding prize committees out of which four in Stockholm and one in Oslo (at that time Sweden and Norway were a united kingdom). The Nobel Foundation was instituted in 1900 with the main function to administer econo­ mically the Nobel Donation. It has done so very successfully. The Foundation has even been abl~ to beat the inflation and the prizes have steadily increased during the last 20 years. It might interest you to hear that this year's prizes will amount to 681. 000 Sw. crowns each. Due to the favourable financial development and also due to addi­ tional donations the Nobel Foundation decided to extend its inte­ rests by promoting the arrangements of symposia, lectures and other international scientific activities.