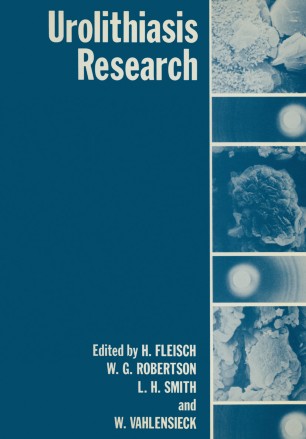 In recent years, a growing interest has prompted increasing numbers of research publications and scientific conferences on the subject of urolithiasis. The aims of this symposium were three: a) to review and inte­ grate recent progress in major subject areas, b) to discuss current research developments and c) to stimulate interchange between investigators in Europe and in America. In a series of morning lectures, invited, recognized experts presented comprehensive reviews of major fields of urolithiasis research such as the physical chemistry of crystal formation, the metabolism of stone forming substances, and modes of therapy. A special emphasis was given to general renal physiology and the renal excretion of Ca++, Pi, Mg, oxalate and urate. Despite its obvious importance, renal function has been relatively neglected in uro­ lithiasis research. New research results were presented by the mechanism of after­ noon poster sessions. This procedure permitted informal lengthy discussions between those participants especially interested and the responsible investigator himself. In addition, informal group discussions were organized during the evenings on an ad hoc basis. In this volume, both the review lectures and brief summaries of the poster presentations have been collected. Interchange between European and American investigators was achieved by the direct participation of a large delegation from North America. This large attendance was made possible by the generous support of the National Institute for Arthritis, Metabolism and Digestive Disease U.S. N.I.H.