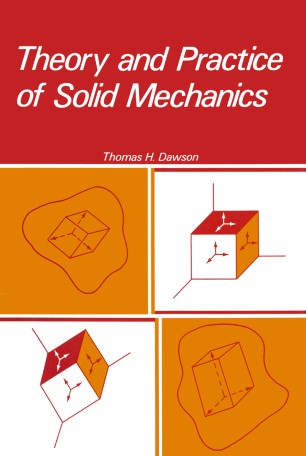 Theory and Practice of Solid Mechanics

This book is intended for use by engineers and scientists who have a need for an introduction to advanced topics in solid mechanics. It deals with modern concepts of continuum mechanics as well as with details of the classical theories of elasticity, thermal elasticity, viscous elasticity, and plasticity of solids. The book assumes no prior knowledge of the mechanics of solids and develops the subject entirely from first principles. Rigorous derivations of governing equations are also followed by applications to a number of basic and practical problems. Cartesian tensors are used throughout the book to express mathematical concepts in a clear and concise fashion. Chapter I, accordingly, provides a discussion of this topic for those readers not already familiar with it. This material is then followed by detailed discussions in Chapters 2 and 3 of the kinematics of continuum motion and the fundamental principles of mass conservation and momentum balance. Unlike traditional treatments, this material is first developed for the general large-deformation case and only then restricted to small deformations for use in the usual engineering appli­ cations. In this way the reader thus gets a fuller picture of the basic governing relations of solid mechanics.