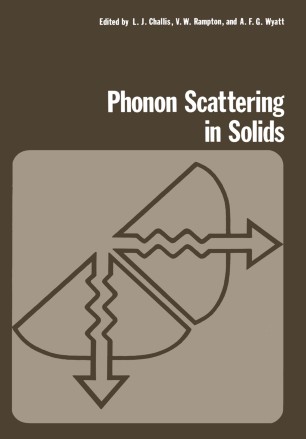 The Second International Conference on Phonon Scattering in Solids was held at the University of Nottingham from August 27th - 30th 1975. It was attended by 192 delegates from 24 countries who were accompanied by 43 members of their families. Eleven invited papers were read and 96 contributed papers; the contributed papers were in two parallel sessions. The Conference included the topics of the two International Conferences held in France in 1972, in Paris and at Ste Maxime. The Conference brought together workers concerned with many aspects of phonon scattering in solids and liquid helium. Some of the work reported were studies of the intrinsic properties of diel­ ectric materials such as the effects of anharmonicity, dispersion and anisotropy on phonon propagation and the conditions for the existence of zero sound and second sound modes. Work was also pres­ ented on various aspects of phonon interaction with free electrons in metals and semiconductors. A substantial part of the Conference was devoted to phonon spectroscopy - investigations of the energy levels of ions or neutral impurities by observing the resonant absorp­ tion or scattering of phonons. The materials being studied include paramagnetic and parae1ectric solids, amorphous systems in which the 'impurities' appear to be intrinsic, and semiconductors. Work was reported on the use of phonons to observe phase transitions; in some cases the cooperative phase also arises through strong spin­ phonon coupling. One of the intriguing unsolved problems discussed in detail at the Conference is the Kapitza conductance problem.