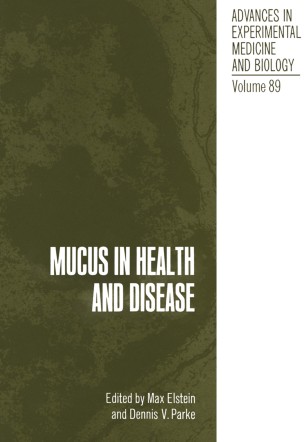 Mucus in Health and Disease

Part of the Advances in Experimental Medicine and Biology book series (AEMB, volume 89)

Sir Francis Avery Jones 149 Harley Street, London, WlN 2DE, U.K. This first international symposium on Mucus in Health and Disease brought together medical scientists, physiologists, pharmacologists, physicians, surgeons, gynaecologists, ophthalmologists, anatomists, biologists, medical engineers and biochemists - a spectrum which indicates the wide field of interest in mucus both in health and in disease. The idea for the meeting came from Dr. S. Gottfried whose researches led to the development of carbenoxolone, a substance which stimulates mucus production and in this way favours the healing of peptic ulcers. The idea was enthusiastically welcomed by Professor Dennis Parke and he, and Mr. Max Elstein, have been the dynamo behind the meeting. The opening keynote address by Professor Clamp set the scene for the Symposium, painting a broad canvas and highlighting the main features. We cannot do without mucus, irritating though it may be if there is too much or too little, and in so many systems of the body it plays a vital role. For the first time the specialists in different systems of the body have had the opportunity of coming together and discussing their special problems - a cross-fertilisation which proved to be most valuable, not only for one another but also for the medical scientists who had been closely concerned with the chemistry and physical properties of mucus.