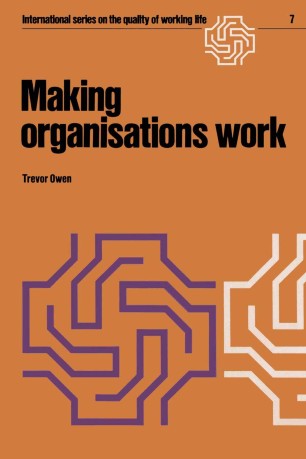 Part of the International series on the quality of working life book series (IQWL, volume 7)

I have worked as a manager in a large industrial organisation for the last twenty years. During that time I have seen the job of a manager change almost out of recognition in both complexity and difficulty. For the last five ofthose years I have held ajob which has been much concerned with the problems which managers face under these cir­ cumstances, and I have been in the position to discuss these pro­ blems with people doing similar jobs in other large organisations, who have in turn often asked me for advice on their problems. The result has been to build up a general picture of the manager in large and complex industrial organisations and of those practices which will help him or her to be effective and those which will not. I suspect that the picture which emerges is one which may have some validity for large and complex organisations in other spheres - trade unions, for instance, or the civil service - but I have no first-hand evidence to show whether this is so or not. It is a picture which is certainly not so relevant for small organisations. These (and I have had the pleasure of working in some from time to time) have their own problems, but they tend to be different ones.