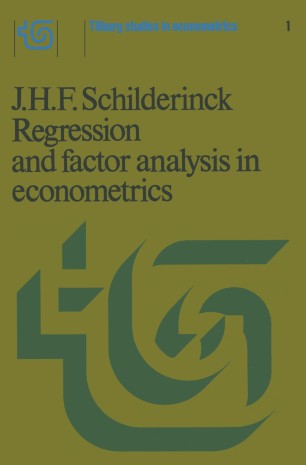 This book deals with the methods and practical uses of regression and factor analysis. An exposition is given of ordinary, generalized, two- and three-stage estimates for regression analysis, the method of principal components being applied for factor analysis. When establishing an econometric model, the two ways of analysis complement each other. The model was realized as part of the 'Interplay' research project concerning the economies of the European Common Market countries at the Econometrics Department of the Tilburg School of Economics. The Interplay project aims at: a. elaborating more or less uniformly defined and estimated models; b. clarifying the economic structure and the economic policy possible with the linked models of the European Community countries. Besides the model for the Netherlands published here, the models for Belgium, Italy, West Germany and the United Kingdom are ready for linking and for publishing later on. The econometric model presented in this book and upon which the Interplay model is based comprises eleven structural and twenty-one definitional equations; it is estimated with ordinary, two- and three-stage least squares. The analysis of the model is directed at eliminating multicollinearity, accor­ ding to D.E. Farrar's and R. Glauber's method. In practice, however, complete elimination of multicollinearity leads to an exclusion of certain relations which is not entirely satisfactory. Economic relations can be dealt with more fully by analyzing the variables involved in detail by factor analysis. In this study factor analysis is also a suitable method for a comparative analysis of different periods.