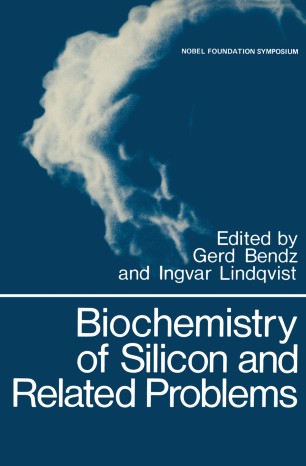 Biochemistry of Silicon and Related Problems

Silicon chemistry was initiated in 1823 by Berzelius who prepared elemental silicon. In many ways silicon was considered a typical opposite of carbon, although the two elements are closely related as to their electronic structure, both having four valence electrons. The properties of their compounds are, however, extreme­ ly different. Both form extended structures, but in different ways - carbon by covalent carbon-carbon bonds; silicon by polar silicon- -oxygen-silicon bonds. The complex carbon compounds are integral parts of all living matter, plants and animals. The corresponding silicon compounds build up a major part of dead matter, soils and minerals. As recently as twenty years ago the title of this Symposium, "BiOChemistry of Silicon", would have been considered as contradictio in adjecto. However, the development in the field has, during the past fifteen years, been overwhelming and has convinced us that silicon is a necessary element in the life processes, for animals as well as for plants. Interesting therapeutical uses have been suggested, but we have also become increasingly aware of serious occupational diseases - asbestosis and silicosis - and of possible cancerogenic effects. It is our hope that this volume will give some idea about various aspects of silicon compounds which were discussed during the Symposium.