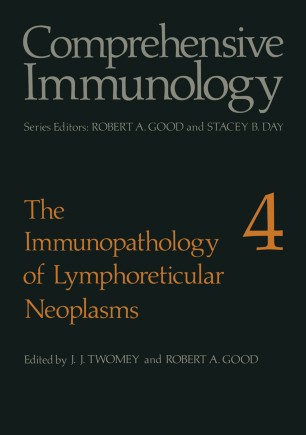 The Immunopathology of Lymphoreticular Neoplasms

Until recently, understanding of the lymphomas was limited and largely descriptive. Attention has been focused, for the most part, upon morphological issues and clinical matters. Although useful, this approach has many shortcomings. The true cytoidentity of primary neoplastic cells was not established by these methods, nor could their clonal nature be recognized. The more overt changes in immunological function, such as monoclonal gammopathies and immunodeficiencies, were appre­ ciated as important components of these diseases. However, subtle immunological perturbations were not recognized. Furthermore, associations were not established between the lymphoreticular neoplasms on the one hand and both primary and secondary immunological abnormalities on the other. There has been considerable recent progress in the fields of immunobiology, cytology, and immunochemistry. These new approaches have proved readily applicable to studies on the lymphomas. The term "lymphoma" has been applied to a heterogeneous group of neo­ plasms that involve lymphoid tissues. This term is not altogether satisfactory, since it implies that cells of primarily the lymphoid series are involved in the neoplastic process. Some neoplasms, heretofore classified as "lymphomas," now appear, from the results of penetrating analysis using newer methodology, to be malignan­ cies of the macrophage series, rather than of the lymphocytic series. These neo­ plasms include Hodgkin's disease and a minority of neoplasms previously referred to as "histiocytic" lymphomas. The majority of these "histiocytic" lymphomas are now known to be lymphoid malignancies involving the B-cell series.