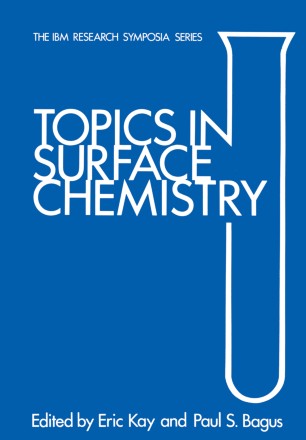 The papers in this volume were presented at an international symposium on Topics in Surface Chemistry which was held in Bad Neuenahr, West Germany., September 7-9, 1977. The symposium was sponsored by IBM Germany. It has been recognized for many years that our understanding of bulk phenomena and their subsequent exploitation depends largely on our ability to define correlations between microscopic structure and the physical and chemical phenomena of interest. The role played by surface phenomena in the overall behavior of a material has been a subject for speculation for a long time, but only during the last decade or so have experimental and theor­ etical tools been developed which make it possible to investigate surface structure and related surface phenomena uniquely. Numerous surface spectroscopies have been developed in recent years intended to describe the geometric, vibrational and electronic structure of a surface. Our present understanding of surface, thin film and interfacial phenomena in solid state physics owes much to these developments. In chemistry much of the interest in surface science has come from the obvious implications to such important and diverse fields as catalysis and corrosion. It takes little imagination to recognize that there are many other areas where advances in surface science can be brought to bear.