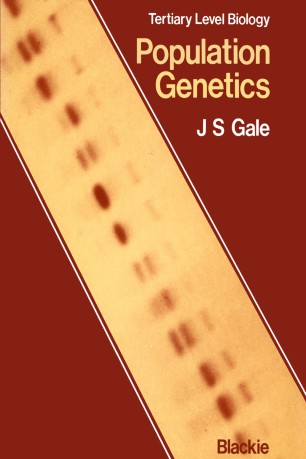 POPULATION GENETICS IS OFTEN THOUGHT TO BE A DIFFICULT SUBJECT. To some extent, difficulties are inevitable in a field where some quite basic points are controversial. However, problems are most acute when theoretical points are discussed, despite the fact that there has been very little controversy over the mathematics. In my experience, the actual mathematical manipulations rarely cause much difficulty. Rather it is that the biologist, lacking the physicist's or chemist's experience in "reading" mathematical formulae, finds it difficult to appreciate what is happening in a mathematical treatment and to grasp the implications of the results obtained, when these are given in mathematical form. Accordingly, I have followed a procedure, which students seem to find helpful, of giving a rough-and-ready verbal treatment of a problem before attempting a much more exact mathematical treatment; when the results of the latter are not readily interpretable, I have given an elucidation. Another problem which often concerns students is the reliability of results obtained using approximate methods; I have, therefore, discussed this in fair detail in critical cases. When dealing with controversial issues, I have done my very best to be fair. To conceal one's opinions entirely would probably make for a very dull book. I trust, however, that I have given enough for the reader previously unfamiliar with these controversies to form his own judge­ ment.