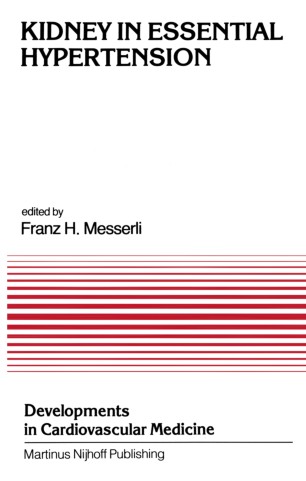 Proceedings of the Course on the Kidney in Essential Hypertension held at New Orleans, Louisiana, March 18–19, 1983

The kidney, similar to the heart, plays a three-fold role in essential hypertension. First, it participates in the patho­ genesis of arterial hypertension. Second, it suffers as a target organ of long-standing hypertension, and third, it experiences the effects of antihypertensive therapy. Perhaps most contested at the present time is the involvement of the kidney in the patho­ genesis of essential hypertension. More than a century ago, William Osler put forward three basic hypotheses about the "genuine contracted kidney. "l 1. "The hypertrophy can be regarded as an effect to overcome a sort of stop-cock action of the vessels when under the influence of an irritating ingredient in the blood greatly contracted and increased the peripheral resistance. " Clearly this hypothesis of an "irritating ingredient" is perhaps the most convincing nowadays, and numerous attempts have been made to identify a specific vasoconstrictive agent in the blood in essential hypertension. 2. "The obliteration of a large number of capillary territories in the kidney materially raised the arterial pressure. An additional factor of dimin­ ished excretion of water also heightened the pressure within the blood vessel. " Today we know that fluid volume overload in the presence of reduced renal mass seems to be the most likely mechanism accoun­ ting for renal parenchymal hypertension and, as shown by Guyton's group, for certain forms of experimental hypertension. 3.