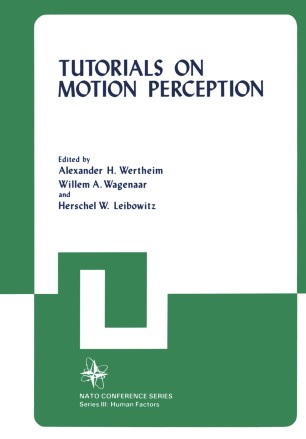 From August 24-29, 1980 the international "Symposium on the Study of Motion Perception; Recent Developments and Applications", sponsored by NATO and organized by the editors of this book, was held in Veldhoven, the Netherlands. The meeting was attended by about eighty scholars, including psychologists, neurologists, physicists and other scientists, from fourteen different countries. During the symposium some fifty research papers were presented and a series of tutorial review papers were read and discussed. The research presentations have been published in a special issue of the international journal of psychonomics "Acta Psychologica" (Vol. 48, 1981). The present book is a compilation of the tutorial papers. The tutorials were arranged around early versions of the chapters now appearing in this book. The long discussions at the Veldhoven tutorial sessions resulted in extensive revisions of the texts prior to this publication. Unfortunately this led to a delay in publication, but we feel that this was justified by a greater depth of understanding which, in our opinion, has significantly increased the quality of the book. As they now stand, the chapters cover most of the issues relevant to the study of motion perception. Also they clearly reflect the intensive exchange of knowledge that took place during the symposium. As such we think that this book can be used both as an advanced text for students and scientists alike and as a comprehensive reference source.