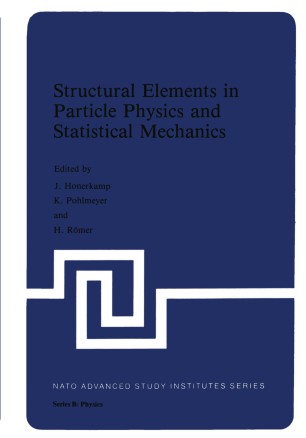 The NATO ADVANCED SUMMER INSTITUTE ON THEORETICAL PHYSICS 1981 st was held in Freiburg, Germany from August 31 until September 11th 1981. It was the twelfth in a series of Summer Institutes organized by German Universities. Its main objective was a thorough comparison of structures and methods of two different branches of Theoretical Physics, name­ ly Elementary Particle Physics and Statistical Mechanics, and the idea was to exhibit the structural similarities, to trace them until their origins, to compare solution and approximation schemes and to report on those new results and methods in either of the two branches which are indicative of an intimate connection between them. Thus stimulation of a deeper understanding and development of new Methods could be hoped for in both fields. The contributions to the Summer Institute - lectures and seminars - are contained in this volume. One group of them gives concise up-to-date information on basic topics in Statistical Mechanics and Phase Transitions, Dynamical Systems, Solvable Lattice Models and Lattice Gauge The­ ories. A second group is devoted to special topics which illustrate the interrelationship between Statistical Mechanics and Elementary Particle Physics, like topological quantum numbers on a lattice, model studies on the confinement problem, etc. Supplementary information on experimental implications and on neighbouring fields is provided in a third group.