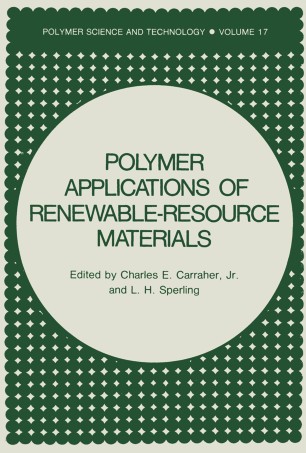 Part of the Polymer Science and Technology book series (volume 17)

For there is hope of a tree, If it be cut down, That it will sprout again And that the tender branch Thereof will not cease. Job XIV (7) Mankind has been blessed with a multitude of resources. In the beginning he utilized almost soley replenishable items such as vegetation and animal protein, for both nourishment and shelter. Gradually, such metals as copper and iron were developed and replaced wood as a material of construction. Cement and glass, although more plentiful than other minerals, also replaced the use of growing sub­ stances. Coal and oil became the primary sources of heat and power. Closer to the focus of this book, petroleum products began to replace the vegetable oils, tannin, wool, cotton, leather, silk, rubber, etc. in a host of applications. Surely, it was argued, the new materials did the job better and cheaper. What they didn't say is that soon we would run out of oil. In any case, research on growing natural products, now called renewable resources, slowed, and these industries sought only to maintain their status quo. The 20th Century saw an unprecedented emphasis and dependence on nonrenewable resources as energy sources (petroleum, coal, ura­ nium) and the fabric of technology (drugs, clothing, shelter, tires, computer parts). The predawn of the 21st Century brings a reali­ zation that a cyclic shift back towards the use of renewable re­ sources for technological application is in order.