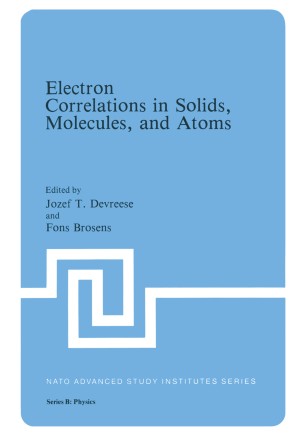 From July 20 till 31, 1981, the Advanced Study Institute on "Electron Correlations in Solids, Molecules and Atoms", sponsored by NATO, was held at the University of Antwerpen (U.I.A.), in the Conference Center Corsendonk. In the last few years, the problem of many-electron correlations has gained renewed attention, due to recent experimental and theoretic­ al developments. From the theoretical point of view, more sophisticated treatments of the homogeneous electron gas model evolved, including dynamical aspects of the electron correlation in the dielectric response. Furthermore, the homogeneous electron gas, which served as a model for simple metals, was extended to include spin- and charge-density waves and phasons. The concept of elementary excitations too was introduced not only in perfectly ordered metallic crystals, but also in magnetic alloys, in liquid metals and alloys, in semiconductors, and even in molecules and atoms. Fairly accurate quantitative calculations of these effects recently became possible, ranging from plasmon frequencies in atoms, over dielectric response of semiconduc­ tors and resistivity in magnetic alloys to electron-hole liquids and their phase separation. The recent technological evolution allowed for more accurate measurements in previously unaccessible domains, e.g. X-ray scatter­ ing and fast electron energy loss at large wavevector. Moreover, these new developments opened new perspectives in physics, accompany­ ing or even introducing the new concepts which also evolved in the theory.