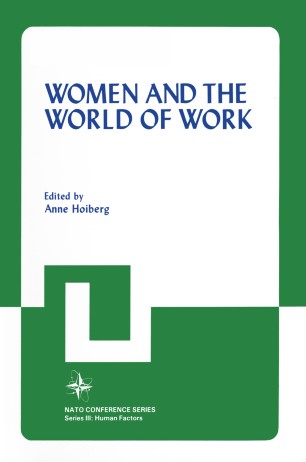 Women and the World of Work

From August 4 to 8, 1980, the Science Committee of the North Atlantic Treaty Organization (NATO) sponsored the symposium, "Women and the World of Work," which was held at the Hotel Sintra Estoril in the coastal area south of Lisbon, Portugal. This symposium hatl been "in progress" since 1977 when the idea to prepare a proposal for a NATO­ sponsored symposium on the topic of women and the military was first suggested by Dr. Walter Wilkins, then Scientific Director of the Naval Health Research Center, San Diego, California. At that time and during the previous 5 years, increasing numbers of women were being recruited into military service not only in the United States but also in several NATO-allied countries. Few research projects on the utilization of women in the military had been reported in the scientific literature with the exception of work conducted at the University of Chicago and Naval Health Research Center. Several investigators, however, were identified who had recently initiated research in this area-and who expressed interest in participating in the proposed symposium. A few months after submitting the proposal, Dr. B. A. Bayraktar, Director of the Scientific Affairs Division responded that the members of the Science Committee recommended the deletion of those segments of the tentative program which pertained to women and the military. The reason given for this suggested change was that the topic chosen was similar to the theme of other recent international conferences.