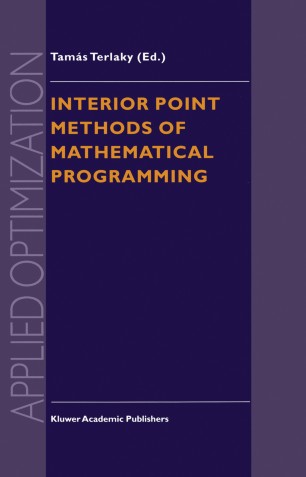 One has to make everything as simple as possible but, never more simple. Albert Einstein Discovery consists of seeing what every­ body has seen and thinking what nobody has thought. Albert S. ent_Gyorgy; The primary goal of this book is to provide an introduction to the theory of Interior Point Methods (IPMs) in Mathematical Programming. At the same time, we try to present a quick overview of the impact of extensions of IPMs on smooth nonlinear optimization and to demonstrate the potential of IPMs for solving difficult practical problems. The Simplex Method has dominated the theory and practice of mathematical pro­ gramming since 1947 when Dantzig discovered it. In the fifties and sixties several attempts were made to develop alternative solution methods. At that time the prin­ cipal base of interior point methods was also developed, for example in the work of Frisch (1955), Caroll (1961), Huard (1967), Fiacco and McCormick (1968) and Dikin (1967). In 1972 Klee and Minty made explicit that in the worst case some variants of the simplex method may require an exponential amount of work to solve Linear Programming (LP) problems. This was at the time when complexity theory became a topic of great interest. People started to classify mathematical programming prob­ lems as efficiently (in polynomial time) solvable and as difficult (NP-hard) problems. For a while it remained open whether LP was solvable in polynomial time or not. The break-through resolution ofthis problem was obtained by Khachijan (1989).