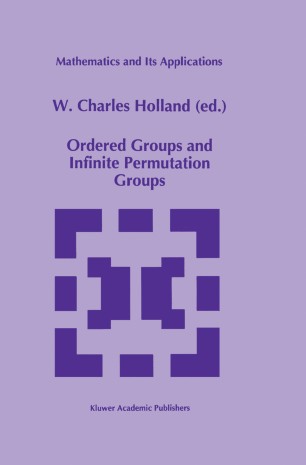 Part of the Mathematics and Its Applications book series (MAIA, volume 354)

The subjects of ordered groups and of infinite permutation groups have long en­ joyed a symbiotic relationship. Although the two subjects come from very different sources, they have in certain ways come together, and each has derived considerable benefit from the other. My own personal contact with this interaction began in 1961. I had done Ph. D. work on sequence convergence in totally ordered groups under the direction of Paul Conrad. In the process, I had encountered "pseudo-convergent" sequences in an ordered group G, which are like Cauchy sequences, except that the differences be­ tween terms of large index approach not 0 but a convex subgroup G of G. If G is normal, then such sequences are conveniently described as Cauchy sequences in the quotient ordered group GIG. If G is not normal, of course GIG has no group structure, though it is still a totally ordered set. The best that can be said is that the elements of G permute GIG in an order-preserving fashion. In independent investigations around that time, both P. Conrad and P. Cohn had showed that a group admits a total right ordering if and only if the group is a group of automor­ phisms of a totally ordered set. (In a right ordered group, the order is required to be preserved by all right translations, unlike a (two-sided) ordered group, where both right and left translations must preserve the order.