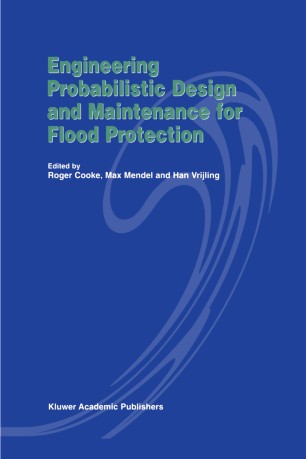 The First Conference on Engineering Probability in Flood Defense was orga­ nized by the Department of Mathematics and Informatics of the Delft U niver­ sity of Technology and the Department of Industrial Engineering and Opera­ tions Research of the University of California at Berkeley, and was held on June 1,2 1995 in Delft. Groups at Berkeley and Delft were both deeply engaged in modeling deterioration in civil structures, particularly flood defense structures. The plans for the conference were well under way when the dramatic floods in The Netherlands and California in the winter of 1994-1995 focused world attention on these problems. The design of civil engineering structures and systems is essentially an example of decision making under uncertainty. Although the decision making part of the process is generally acknowledged, the uncertainty in variables and param­ eters in the design problem is less frequently recognized. In many practical design procedures the uncertainty is concealed behind sharp probabilistic de­ sign targets like 'once in a thousand years' combined with a standardized use of safety factors. The choice of these probabilistic design targets, however, is based on an assessment of the uncertainty of the variable under consideration, and on its assessed importance. The value of the safety factor is governed by similar considerations. Standard practice is simply accu~ulated experience and engineering judgment. In light of the great number of civil engineering structures that function suc-. cessfully, one may say that this standard practice has proven itself broadly satisfactory.