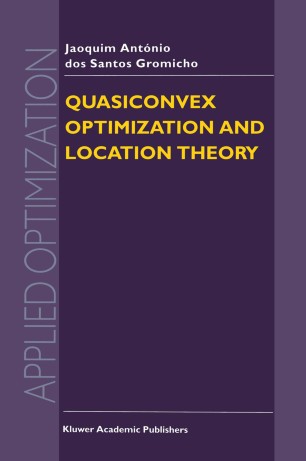 grams of which the objective is given by the ratio of a convex by a positive (over a convex domain) concave function. As observed by Sniedovich (Ref. [102, 103]) most of the properties of fractional pro­ grams could be found in other programs, given that the objective function could be written as a particular composition of functions. He called this new field C­ programming, standing for composite concave programming. In his seminal book on dynamic programming (Ref. [104]), Sniedovich shows how the study of such com­ positions can help tackling non-separable dynamic programs that otherwise would defeat solution. Barros and Frenk (Ref. [9]) developed a cutting plane algorithm capable of optimizing C-programs. More recently, this algorithm has been used by Carrizosa and Plastria to solve a global optimization problem in facility location (Ref. [16]). The distinction between global optimization problems (Ref. [54]) and generalized convex problems can sometimes be hard to establish. That is exactly the reason why so much effort has been placed into finding an exhaustive classification of the different weak forms of convexity, establishing a new definition just to satisfy some desirable property in the most general way possible. This book does not aim at all the subtleties of the different generalizations of convexity, but concentrates on the most general of them all, quasiconvex programming. Chapter 5 shows clearly where the real difficulties appear.