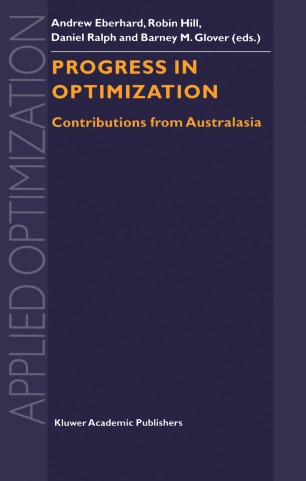 Although the monograph Progress in Optimization I: Contributions from Aus­ tralasia grew from the idea of publishing a proceedings of the Fourth Optimiza­ tion Day, held in July 1997 at the Royal Melbourne Institute of Technology, the focus soon changed to a refereed volume in optimization. The intention is to publish a similar book annually, following each Optimization Day. The idea of having an annual Optimization Day was conceived by Barney Glover; the first of these Optimization Days was held in 1994 at the University of Ballarat. Barney hoped that such a yearly event would bring together the many, but widely dispersed, researchers in Australia who were publishing in optimization and related areas such as control. The first Optimization Day event was followed by similar conferences at The University of New South Wales (1995), The University of Melbourne (1996), the Royal Melbourne Institute of Technology (1997), and The University of Western Australia (1998). The 1999 conference will return to Ballarat University, being organized by Barney's long-time collaborator Alex Rubinov. In recent years the Optimization Day has been held in conjunction with other locally-held national or international conferences. This has widened the scope of the monograph with contributions not only coming from researchers in Australia and neighboring regions but also from their collaborators in Europe and North America.