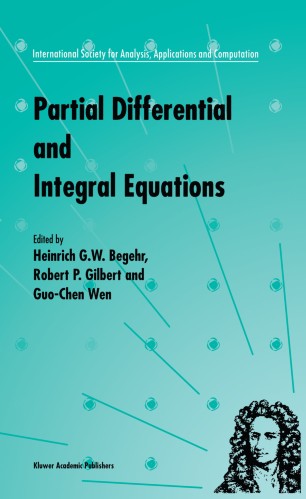 This volume of the Proceedings of the congress ISAAC '97 collects the con­ tributions of the four sections 1. Function theoretic and functional analytic methods for pde, 2. Applications of function theory of several complex variables to pde, 3. Integral equations and boundary value problems, 4. Partial differential equations. Most but not all of the authors have participated in the congress. Unfortunately some from Eastern Europe and Asia have not managed to come because of lack of financial support. Nevertheless their manuscripts of the proposed talks are included in this volume. The majority of the papers deal with complex methods. Among them boundary value problems in particular the Riemann-Hilbert, the Riemann (Hilbert) and related problems are treated. Boundary behaviour of vector-valued functions are studied too. The Riemann-Hilbert problem is solved for elliptic complex equations, for mixed complex equations, and for several complex variables. It is considered in a general topological setting for mappings into q;n and related to Toeplitz operators. Convolution operators are investigated for nilpotent Lie groups leading to some consequences for the null space of the tangential Cauchy Riemann operator. Some boundary value problems for overdetermined systems in balls of q;n are solved explicitly. A survey is given for the Gauss-Manin connection associated with deformations of curve singularities. Several papers deal with generalizations of analytic functions with various applications to mathematical physics. Singular integrals in quaternionic anal­ ysis are studied which are applied to the time-harmonic Maxwell equations.