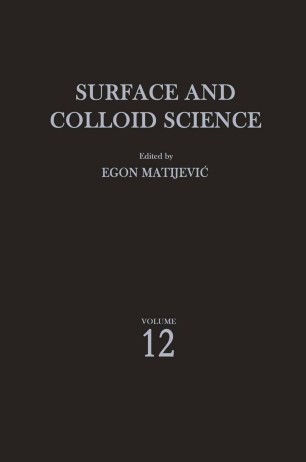 Ever since the first volume appeared in 1969, this series has received good reviews in a variety of periodicals published in different corners of the world. It would seem that the work has fulfilled its purpose as outlined in the Preface to Volume 1. The rapidly increasing interest in surface and colloid science by people engaged in industrial research and development, and in environmental, ecological, medical, pharmaceutical, and other areas, justifies the continuation of such an effort. The Surface and Colloid Science series originated with John Wiley and Sons and has been continued with Plenum Press. This volume is the third with the present publisher, and is the best assurance of our mutual interest to proceed with this work. Some books in the series, as was the case with Volume 11, may appear under the editorship of other workers in the field. For reasons of continuity, a sequential numbering system will be maintained. This editor hopes to provide the scientific and technical community with high-quality contributions in surface and colloid science in the future. He invites specialists to submit definitive chapters on any topic within the broad area of our discipline for inclusion in this series.