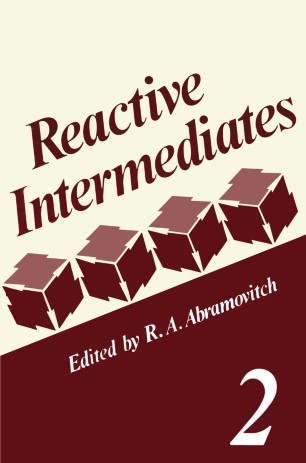 The field of reactive intermediates has been blossoming at a rapid rate in recent years and its impact on chemistry, both "pure" and "applied," as well as on biology, astronomy, and other areas of science, is enormous. Several books have been published which cover the area; one, edited by McManus, * surveys the subject in general at the senior undergraduate or beginning graduate level. In addition, a number of monographs have appeared which deal with individual topics such as carbenes, nitrenes, free radicals, carbanions, carbenium ions, and so on, in great depth. Our objective is somewhat different. We hope that these Advances in . . . type of volumes will appear at irregular intervals of a year to 18 months each. We intend to publish up-to-date reviews in relatively new areas of the chemistry of reactive intermediates. These will be written by world authorities in the field, each one of whom will give the reader a current in-depth review of all aspects of the chemistry of each of these species. It is our plan that the subjects to be reviewed will cover not only organic chemistry but also inorganic, physical, bio-, industrial, and atmospheric chemistry. The volumes themselves, we hope, will end up being reasonably interdisciplinary, though this need not and probably will not be the case for the individual reviews.